Posted on October 9, 2017 by vmetromultimedia

“I am patient, but will pounce on opportunity.” – Kia ‘The Golden Girl’ Lola

On October 14, 2017 Kia ‘The Golden Girl’ Lola and Florina ‘Cuddles’ Moeller are set to collide in amateur MMA competition at Fight Circus, in Kansas City, Missouri.

Kia ‘The Golden Girl’ Lola started her martial arts journey in Judo where she achieved a green belt under Rob Thornton at the University of Memphis.  Lola did not stop at just Judo, she continued her skill set by competing in Muay Thai.

“I had my first two Muay Thai fights under the National Fighting Championship (NFC) where I found my rhythm,” explains Lola.  She then traveled to Orlando, Florida in July of 2016 to compete in the International Kickboxing Federation (IKF) World Classic where she defeated Lilian Lam by way of unanimous decision and Guadelupe Larson via split decision for the 2016 IKF World Muay Thai Classic Championship.  Kia has a current 3 – 1 record in competitive Mauy Thai. 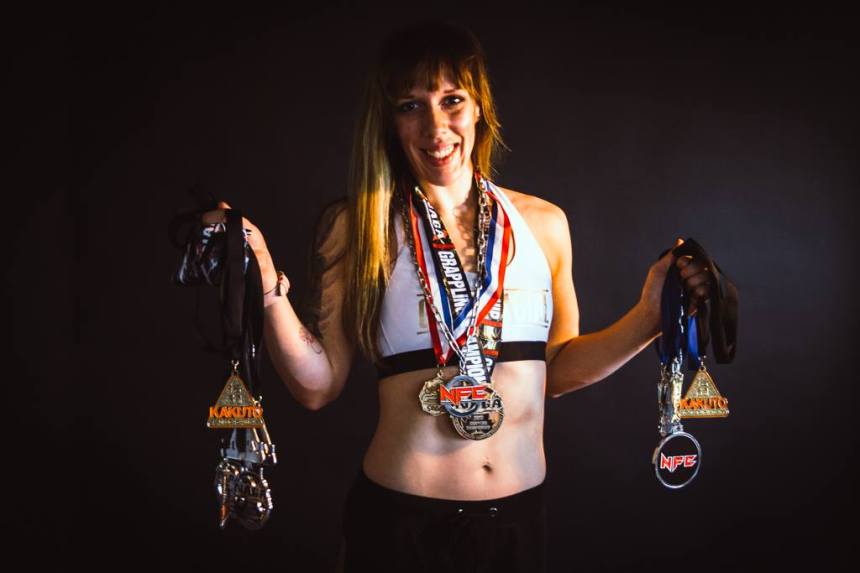 ‘The Golden Girl’ fights out of Atlanta, Georgia and has become the second ranked pound for pound female mixed martial arts fighter (tapology-ranking) in the state of Georgia after just one amateur fight.

The twenty-seven year old Lola made her move to amateur mixed martial arts debuting back in July of 2017 against Madi Gilbert.  The match was part of the promotion NFC – 97 held in Duluth, Georgia at the Infinite Energy Center.  Lola ended the contest by way of technical knockout in the third round.  Lola trains out of American Top Team Atlanta under the guidance of coaches Roan Jucao Carneiro, Devorious Tubbs, Jake Jo, and Marshall Morotte.  When it comes to fight time, Lola seeks out the classes and knowledge from these individuals, as well as adding strength and conditioning under the direction of Rasheed Mitchell at PT Cross Training and MMA team training under Mike Galitello.  “All of these individuals are integral in a fight camp,” adds ‘The Golden Girl’.

Lola continues to build her combat sports arsenal by incorporating Brazilian Jiu Jitsu.  Currently Lola is a one stripe blue belt in Brazilian Jiu Jitsu under Roan Jucao Carneiro.  “My foundation is in jiu jitsu and Muay Thai,” explains Lola to Queen MMA Media.  “But I also implement wrestling and judo concepts into my game.”

Roan Jucao Carneiro is a black belt in Brazilian Jiu Jitsu who has been competing as a professional mixed martial artist for almost two decades.  In April of 2007 Carneiro debuted with the extraordinarily popular Ultimate Fighting Championships (UFC).  He was shortly later released by the UFC in September of 2008 only to be re-signed by the prestigious pro MMA organization in December of 2014.  Carneiro was later released once again in May of 2017.    He is extremely experienced and highly skilled having produced a respectable professional career in competitive mixed martial arts.

“It is such an honor to have such a person as a mentor in the game,” explained Lola.  “Jucao is a no nonsense kind of guy.  When you’re in class, you’re working and working hard.”

“The chess match kind of approach has been invaluable for me.  My brain has molded to think more analytically and with sincere calm which carries over into daily life,” responded Lola when asked by Queen MMA Media what she valued most from her experience in Brazilian Jiu Jitsu.  “I mean obviously there’s a health and self-defense benefit to the practice, but the mental benefits are astronomical.”

“I have wanted to jump in the cage since I first saw a documentary covering the journeys of a select few female fighters,” answered Lola when asked by Queen MMA Media what led her to compete in amateur mixed martial arts.  “I had never seen real women be as powerful, hard working and inspirational, so I wanted a piece of that confidence for myself.  I felt like I needed that experience to be a stronger person overall and I’ve been hooked ever since.”

Florina ‘Cuddles’ Moeller will be Kia ‘The Golden Girl’ Lola’s biggest challenge to date in the amateur MMA arena of competition.   Florina was born in Romania and immigrated to the United States in her early twenties.  Unlike her nickname states, she is an aggressive fighter with a 4 – 2 amateur record and is known for pushing forward and having exceptional cardio.  Florina is thirty-three years of age and an experienced amateur mixed martial artist.  With her last amateur MMA fight, a decision win at KC Fighting Alliance against Autumn Cameron back in April of 2016, Florina will be stepping into the cage after a considerable layoff.  Moeller trains at Glory MMA and Fitness under her head coach Zak Cummins, a black belt in Brazilian Jiu Jitsu who has been a successful and active professional MMA fighter from 2007 – present.

“Having more time in the cage is definitely an advantage, but that’s not something that intimidates me,” states Kia when asked by Queen MMA Media if she was concerned about Moeller having considerably more amateur time in the cage.  “I have fought sick and injured before, so you have to be okay with the situation not being 100% ideal.  That’s life and you keep moving forward.”

Lola describes herself as strong and tactical.  “I am patient, but will pounce on opportunity.  I am driven to continue progressing each and every day which both keeps me rising in value but humble,” stated Lola to Queen MMA Media.  Lola is well rounded for a 1 – 0 amateur MMA athlete.  It is likely she will continue to add to her fight game as she progresses as an amateur.  Lola hopes to go pro within 2-3 years.  Her plans are to navigate towards bigger and more challenging fights in an effort to prepare for the step to the professional level.  “So it’s all about getting the plan to work in reality and avoid injuries,” explained Lola.

Kia is expecting Florina to come in and stay aggressive for the entire fight.  “This girl is a athlete who runs marathons and trains regularly, so her cardio will be solid and I should expect the pace to be pushed,” explains Lola.  “I will be fighting Florina Moeller in her hometown where the judges and referee will likely favor her,” she replied when asked by Queen MMA Media if she had any predictions or comments on the upcoming bout.  “I won’t say specifically  what I have in mind, but I am aware of my position and plan on finishing it.” 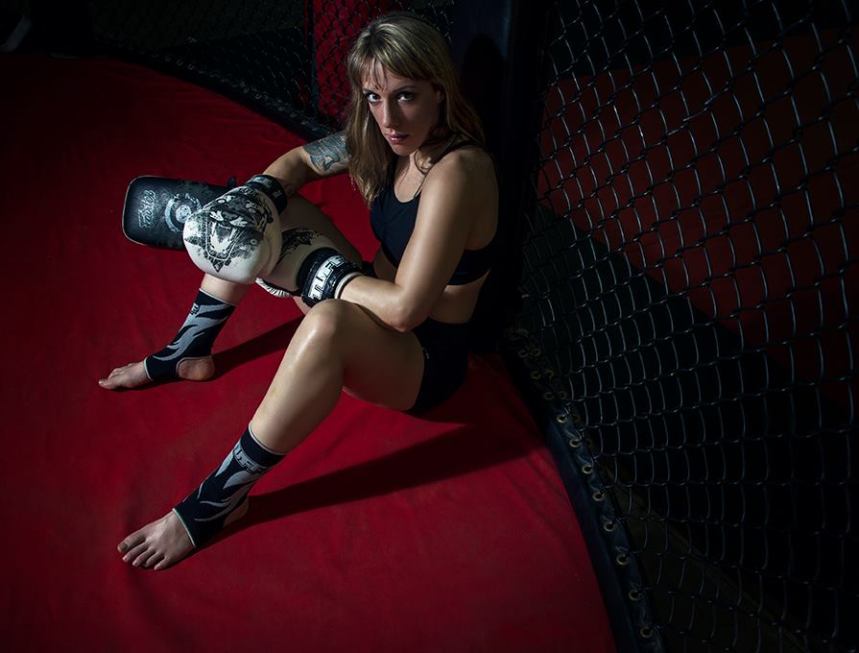 “What stands out about Kia is her laser focus and her vision,” explains Meeshack Lee, a training partner and supporter of Lola.  “She sets goals and works so diligently to crush those goals.  It is no different in the gym, on the mats, or in her business world. She is constantly challenging herself and consistently improving.”

Kia ‘The Golden Girl’ Lola’s future is looking bright as she prepares for her second amateur mixed martial arts fight.  A victory over Florina Moeller will put Kia Lola one step closer to her destination.

Queen MMA Media has provided Kia Lola an opportunity to extend thanks to her sponsors and supporters.

“PT Cross Training sponsors my membership which allows me to get some of the best strength and conditioning available in the best facility I’ve ever attended.  Rainha Fightwear sent an amazing package of rash guards, sports tape, etc which has been so beneficial in training but also allowed me to rep my metallic gold branding on and off the mats.  Lastly I would like to thank my good friend, Meeshack Lee, who sponsored my current fight outfit in collaboration with Andy Nguyen.” – Kia ‘The Golden Girl’ Lola

If you liked the article please take the time and give QUEEN MMA MEDIA a ‘LIKE‘ on facebook.  By supporting us you help to support women’s mixed martial arts.