Marisa Belenchia matched up against Grace Nowak in an atomweight showdown at Premier Fighting Championship 26.  It would be both Nowak and Belenchia’s professional debut.

Belenchia had faced Nowak in early May of 2018 for the Reality Fights promotion vacant amateur atomweight title where Belenchia took the ‘W’ by way of a unanimous decision.  Grace Nowak stepped up and accepted the fight against the “Spider Monkey” after Denise Bruckner pulled out just two weeks prior to the match. 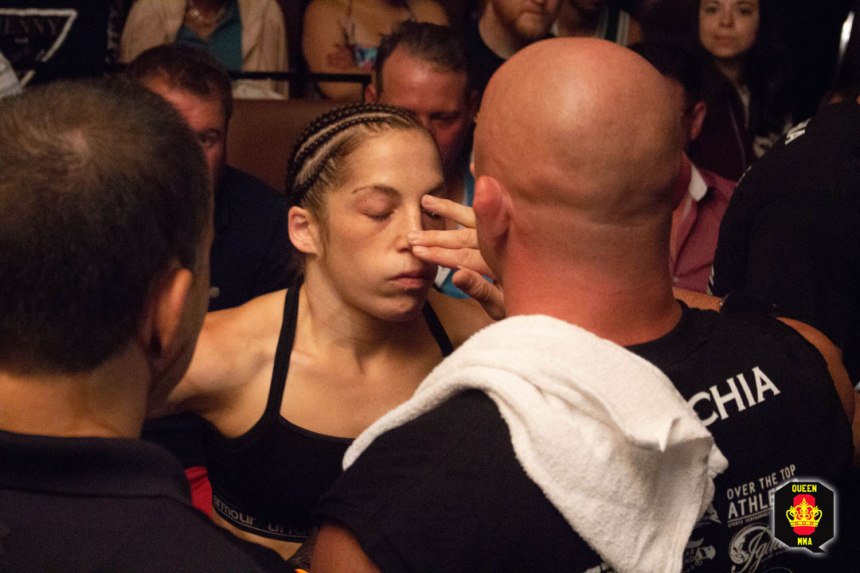 Marisa is an accomplished brown belt in jiu jitsu.  She is a 2016 IBJJF World Jiu Jitsu NO-GI purple belt champion and 2016 IBJJF Pan Jiu Jitsu NO-GI Champion.  There is no question that the “Spider Monkey” is a legitimate BJJ threat in the cage. 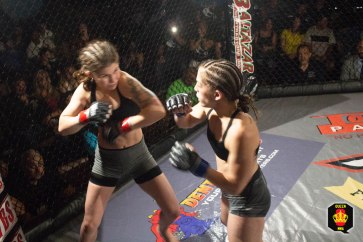 Despite Nowak’s considerable experience having been competing as an amateur since 2010 she was unable to hold her own against the determined Belenchia.  The “Spider Monkey” aggressively took the fight in hand from the start.  Grace Nowak engaged in brief moments of stand up with little success.  Nowak gave it her best but steadily wilted under Belenchia’s offensive assault.  It was very clear, Belenchia was there to swiftly take care of business.

The “Spider Monkey” finished Nowak at 4:15 of the first round with a dynamic submission via straight arm bar.  Photograph courtesy of QUEEN MMA MEDIA  Photo credit – Briana Lynn Banas 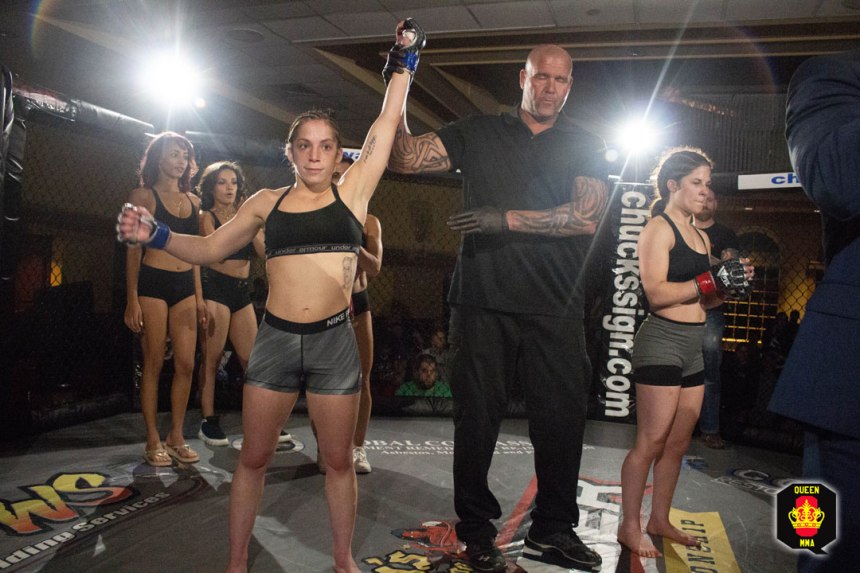 I spoke with Marisa not long after the match.  She explained how the bout had pretty much played out as she had anticipated.  It is common for an atomweight to begin their professional career as an atomweight but then climb to strawweight not long after.

“I plan on staying at atomweight for my pro career,” explained Marisa.  “I do not have an issue with this weight.”  Belenchia is short and strong.  She has what many believe to be the ideal physique for an atomweight.

Grace Nowak came up short in her pro debut and falls to 0 – 1 while Marisa Belenchia moves to 1 – 0 as a pro.  Belenchia had produced a 4 – 1 amateur record before turning professional.  Her only loss coming back in 2016 to Jillian DeCoursey by way of a questionable split decision that many agree could have easily went the other way. Many die hard MMA fans in the northeast feel Belenchia got the better of DeCoursey and deserved the win and there are those who feel DeCoursey gained a close win.  In the end the judges scored the bout as they did.

“I’m sure there will be an eventual rematch,” stated Marisa.  “I was just surprised when the decision was announced.  I just came in to her hometown and left with a controversial decision.  I didn’t realize that even if I won I’d lose.”

Regardless of the outcome Belenchia has the fight skills necessary to excel as a professional.   DeCoursey having turned pro in 2017 has compiled an undefeated 2 – 0 record under the Invicta FC promotion banner.   There is little doubt the chances of a rematch manifesting on the professional level are fairly high as time goes on.

“Spider Monkey” is truly a righteous nickname for this amazing atomweight.  Her ability to maintain balance and control body weight distribution in the cage is quite remarkable.  Marisa is an exciting addition to the sport of professional WMMA.  She has genuine promise as a pro atomweight and carries a fire in her that is almost guaranteed to launch her towards extraordinary professional achievements.

In close I asked the “Spider Monkey” if she had any shout outs.  Her reply was short and simple.  “My Coach Andrew Calandrelli of Ultimate MMA for making me the fighter I am.”