JAYME HINSHAW: Ready to defend her King of the Cage Atomweight Title

(QUEEN MMA MEDIA) – On November 10, 2018 Jayme “Atombomb” Hinshaw will defend her King of the Cage (KOTC) pro atomweight title against Katie “Queen of the North” Saull.

The twenty-nine year old champion is on an outstanding three fight win streak.  She is coming off a one-sided title defense against Bi Nguyen.  Hinshaw demonstrated devastating striking against Nguyen, finishing the fight via fourth round rear naked choke submission in July of 2018.

There is little question that Hinshaw and her team have increased the boom in the “Atombomb’s” stand up game.  Expect the champion to deliver explosive offense during her hunt for another successful defense of the KOTC atomweight championship belt.

The thirty-one year old Katie Saull is riding an impressive three fight winning streak. She is coming off a unanimous decision victory over Cassie Robb at KOTC – ‘Impending Attack’ in July of 2018.  The “Queen of the North” will be bringing a (3 – 2) pro record and a strong hunger for the atomweight championship belt.

Tommy V. – In your last fight, a title defense against Bi Nguyen, you showed, in my view, a noticeable improvement in your striking, namely your punching.  You dropped Bi twice in the first round with right hands.  The first knockdown was a clean right and the second knockdown a nice flurry combination capped by a solid right hand.  In the second round you dropped her again with a big wide hooking right.  Do you feel your punching has increased in accuracy and power?  If so why?  Is this something you have been focusing on in your fight game?

JAYME HINSHAW – “I have been working on my striking since my fight with Kelly V.  I wanted to showcase it when I got the title shot but due to me breaking my arm in the first round I couldn’t display it.  My coaches and I have been working for awhile with my accuracy and power.  I’m glad that not just my coaches and myself have noticed, it means that what we do here at FITNHB works.“

JAYME HINSHAW – “How I see this fight going is with me getting my hand raised at the end of the day.  I’m on a winning streak and don’t plan on slowing down anytime soon. We both are going to go into that cage at our best so I know its going to be a great fight. But like I said before I see myself winning either by KO, TKO, or by submission.“

Tommy V. – You have spent your WMMA pro career as an atomweight, do you see yourself moving up and taking a try at strawweight someday?

JAYME HINSHAW – “Yes I have spent my whole MMA career in the atomweight division the only time I went up to strawweight was just to fill in when a girl had pulled out and they needed someone.  I was down to fight because I didn’t have to cut any weight due to me fighting at atomweight just six days prior.  It was in my amateur career so it was just about getting more experience and me just wanting to fight.  Now that I’m in my pro career I don’t feel it will be in my best interest to go to strawweight.  I sit in and out of fight camp below 120 lbs.  My weight is even on the low side compared to most of the atomweights.  I believe I can hang with most strawweights on the skill set aspect but wouldn’t want to go up and get beat by that lay and pray BS.”

This championship contest has everything needed to be an exciting fight.  Both Hinshaw and Saull are at the top of their fight game and are guaranteed to provide high level action.  This is an atomweight match up the crowd at the Seneca Allegany Resort & Casino will remember. 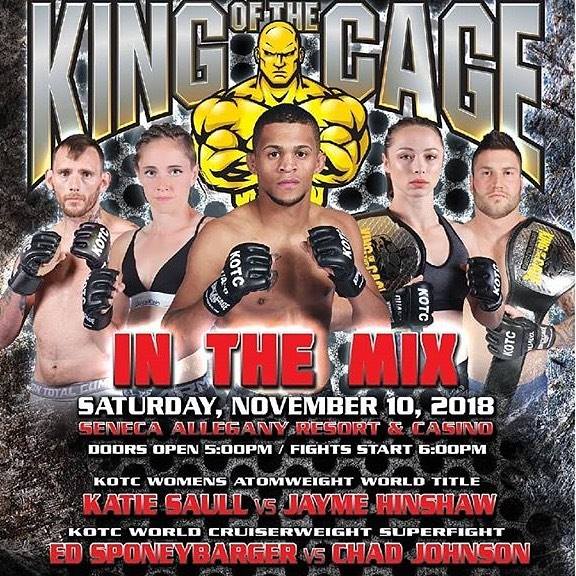