On January 31, 2020 at Rivers Casino & Resort Amy Golding will defend her championship belt in front of her hometown fans.  Golding was offered the opportunity to fight for the Cage Wars vacant amateur atomweight championship on short notice due to a pullout because of injury back in November of 2019.  Amy quickly stepped up and eagerly accepted the challenge.  The fearless Golding not only leaped at the chance, she capitalized on it.  On November 23, 2019 Amy Golding won the title via unanimous decision against a tough, experienced opponent, Jennifer Hicks at Cage Wars 44.  The New York based fighter silenced any critic with a strong performance and walked away the new Cage Wars atomweight champ. 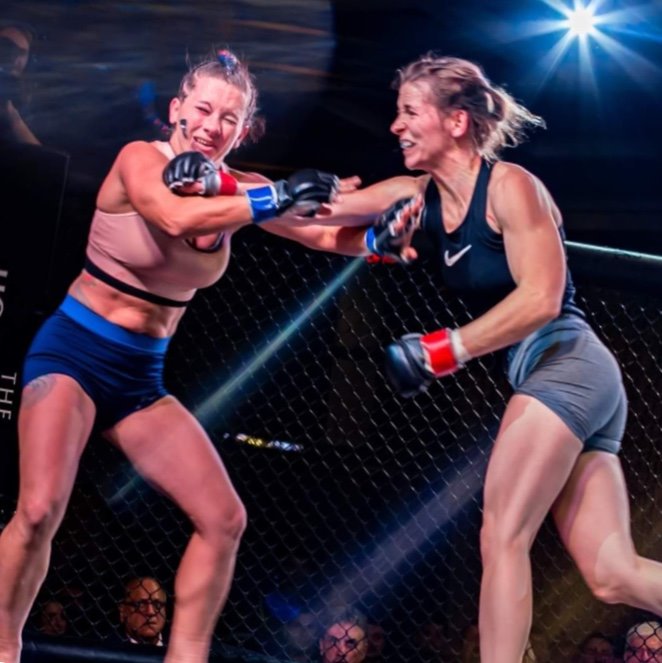 Golding started wrestling in the sixth grade and evolved into a decorated and accomplished Olympic caliber wrestler.  She made her amateur MMA debut in December of 2018 and has demonstrated from the start the level of commitment and stamina needed to climb the amateur MMA mountain.  A little over one year later she is the current Cage Wars atomweight champ ready to put her title on the line against Samantha “The Wolf Queen” Seff at Cage Wars 45.

QUEEN MMA MEDIA was able to gain a brief (Q & A) with Amy Golding before her January 31, 2020 Cage Wars atomweight title defense.

Tommy V. (Queen MMA Media) – Congratulations to you on winning the vacant Cage Wars title against a very game Jennifer Hicks.  How did it feel to get that victory?

Amy Golding – “I was very excited to win the last fight against Jennifer Hicks and become the Cage Wars champ.  It has been very difficult for me to find opponents who will compete locally here in NY, with two opponents pulling out last minute on me, so I was just happy that it went through.  I have to give Jennifer a lot of credit for showing up and giving me a tough fight, she’s one tough girl!“

Tommy V. (Queen MMA Media) – How are you feeling at three weeks out from the fight?

Amy Golding – “I’m three weeks out and feeling great.  Not a single complaint from me.  My camps going well my body’s feeling powerful and explosive and my mind is sharp.  I am exactly where I want to be 3 weeks out.“

Tommy V. (Queen MMA Media) – Your opponent has considerable experience in the cage with a nine bout amateur career.  She has a grappling BJJ style and is not too shy to throw hands upstairs.  Are you aware of Samantha Seff, or do you generally avoid looking into your opponents?

Amy Golding – “Scouting is a part of competing in any type of high level sport.  Yes, I have seen her compete many times and analyzed what she does in her fights.“

Tommy V. (Queen MMA Media) – This fight looks to be a classic wrestling versus BJJ match up if the fight goes to the mat.  Are you confident in your highly decorated wrestling background against a dangerous BJJ artist?

Amy Golding – “I am extremely confident in my wrestling skills to be able to dominate all positions in the fight.“

Tommy V. (Queen MMA Media) – I have followed your amateur MMA career from the start.  I am impressed by the progress in your stand up game in your title win.  Is stand up striking something you have been focusing on as of late?

Amy Golding – “I have been working on the same striking drills as always, but concentrate more on hitting and dodging, not letting anything land and tiring the opponent out.“

Tommy V. (Queen MMA Media) – How do you see this fight playing out?

Amy Golding – “I visualize this everyday since she agreed to the fight so I can answer this easily, I will win in a total domination.  I’m not scared to brawl and am in fact looking forward to it!  Can’t wait to put on a show for everyone!“

Amy Golding is ready to put her title on the line against Samantha “The Wolf Queen” Seff. Amy Golding vs Samantha Seff at CAGE WARS 45.